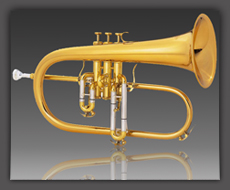 The first trumpets were invented in ancient times, as far back as 1500 B.C., appearing in Egypt, Scandinavia and China. The trumpet took its current form after the invention of the valves in 1820. The current range is two and a half octaves from F # to C, but in jazz, it is not unusual to climb still higher. The trumpets are generally transposing instruments, which do not play the written notes. Thus a trumpet in Bb plays a real sound one tone lower than the written note.
The most common trumpet is a soprano, in Bb. There are also trumpets in C (still used by classical French musicians), in D and Eb and the piccolo trumpet in Bb (often with 4-valves) for a higher register.

The Clarion is a musical wind instrument of the brass family. It is one of the simplest brass instruments, because it has no piston or slider, and it belongs to the natural instruments. The tone is in Bb, it has a conical tube and it is often confused with the cavalry bugle which has a more brilliant sound.

The English term for bugle is "bugle". It should not be confused with the instrument that the French refer to as a "bugle", which is a "flügelhorn" in English.
The bugle was originally a traditional French military instrument.