The year 2000 marked the centennial celebration of the " Union Musicale ". A booklet was prepared, and thanks to the work of the Centennial Committee. The following information was taken from this booklet and retraces, year after year, the moments of joy and of sorrow as well as the musical and social life of the band. We hope you will enjoy your visit…

The beginnings of a musical society

A prefectorial decree dated February 14 1877 authorized the creation of a community band at La Motte-Servolex. The band gave its first concert in December, and the local press gave an impressive eulogy: "Even though the band was created only a few months ago, it has given brilliant results and promises a serious future. All of its participants are workers, most of whom are farmers, spending their free time in the study of music, and are amateurs filled with hard work and good will." Unfortunately, in May of 1884, following a prefectorial investigation, the mayor of the community responded that no musical society existed in La Motte. The length of life of this society was short-lived.

The "union musicale" was officially born on June 7th, 1900, within the walls of the Bouchet Hotel. It was composed of about 20 musicians under the direction of Joseph Vidal, formerly music director of the 13th Battalion of Chasseurs Alpins, remaining 30 years as its director. The creation of the band was welcomed favorably by the municipality, so much so that the mayor, Joseph Richard, accepted to become its president of honor. Internal strife led to the departure of a number of active members, who founded another society, "The Fanfare of La Motte-Servolex", under the presidency of Joseph Plothier. The municipality immediately encouraged the "union musicale" by voting a subvention of 500 francs (76 €) to buy their first instruments.

1902 Saint Cecile The two societies cohabited together for better or for worse, performing together for the managerial festival. For the first time, the Saint Cecile festival took place on November 22nd, followed by a religious program during the Sunday service. The president Plothier was invited by the "Union Musicale" to the Ginet restaurant, an event which was not very memorable for him.

1904 Fines and solidarity: The first official trip took place on July 3rd, for the festival of the Federation of Savoy Music in Annecy. Fines were levied for lateness, unexcused absences, sloppy hair, forgetting one's instrument, getting out of line, etc. A festival of goodwill was organized to come to the aid of those who suffered damage in the fire of Tremblay Dessous.

1912: International Music Competition: : The union had an exceptional trip and won the first prize for sight-reading.

1921-1927 : The fee for participating in funerals is set, a new concert hall is rented, the small band of Saint Ombre (Chambéry-le-Vieux) participates in numerous parades of the society, a grant is received for the purchase of instruments. The annual trip takes the band to Moutiers for the "Savoy Costume and Music Festival".

1928 : 90th anniversary of the inauguration of the Elephant fountain (Chambéry)…the musicians are disguised as hindous in memory of the India campaigns of General de Boigne.

1930: Annual trip to Geneva, and on the return trip, the bass drum and a brass instrument are transformed into accordions: the top of the bus didn't make it under the bridge !

1945: Start up of post-war activities with the first ball on November 25th. Mr. François Mithieux is named director of the society, which he maintained until January 27, 1978.

1950: During the 50th anniversary celebration, 13 musicians received the Medal of Honor of Choral and Musical Societies, with special mention to Mr. Joseph Guillermin who joined in 1900. Of note is the arrival of the first woman, Mrs. Michelle Basset.

1957 :The committee refuses the merger of the societies of neighboring towns and keeps its independence. The new uniforms are introduced in 1958: navy blue pants, gray shirts, beret with emblem, blue tie.

The 60's : The rehearsal room is renovated by the musicians, an annual belote competition is inaugurated, rehearsals are moved to Friday nights, and a new uniform is chosen (the same as Chambéry's). In 1968, there are 43 students enrolled in the music theory and instrumental classes.

The 70's : The financial situation was critical in 1970, and a generous gift from the city permitted the society to continue. Several young ladies joined the Musical Union: Pascale Tochon, Nadine Carraz, Dominique Pin, et Jacqueline Fallevoz. Their uniforms would be a skirt. In 1975, La Motte strengthened its ties with its twin city of Mundelsheim, West Germany. An exchange was organized with parades, concerts and festivities. In 1978, Mr. Marcel Guirao became the new director, the union numbered 63 musicians, the school of music was created, fees were charged for the classes, and expenses were reimbursed for the members of the Union.

1985: A suggestion box is put in place. The musicians request less down time, no more caps, clean-up by rotation, and the installation of a toilet.

1990: The union moves to the Salle St. Jean, but the move is less than satisfactory: cold, crowded conditions, all of which serve as a deterrent to an otherwise good ambience.

1992: The city hall moves the "union" into a prefabricated building, along with the choir "Les Saisons" and the music school.

1993 : Creation of the Bavarian Orchestra, with a typical repertoire.

1994: Creation of the Banda, small street band. The new sports hall presents a good acoustical quality, in spite of some flaws.

1995-97: The symphonic bandbecomes one of the largest in Savoy. The Bavarian orchestra is terminated, and the Banda brings in some money. A commission of young people is created, the Banda receives its green T-shirts with the logo of the community and a windbreaker.

1999: An agreement is signed with the town of Le Bourget du Lac. The municipality presents its project for the "Maison de la Musique", a building which would regroup all who practice music. The trip to Mundelsheim, Germany, is a success in both the quality of the ambience as well as the music.

January 2001: Mini-revolution… : in spite of the hesitation of some of the older members, a woman is elected President of the "Union Musicale", a first in 100 years: Geneviève QUEZEL-AMBRUNAZ.

June 8, 2001 : first rehearsal in the new rehearsal hall of the Maison de la Musique. The official installation ceremony is held in September 2001.

December 2001 : a few changes to the uniform - to revamp the concerts, a decision is made to purchase vests, more practical and more elegant than the jackets, with an added musical touch: a lyre is embroidered on the back of the vests.

May 2002 : exchange with Italy, thanks to Flavio Infanti, who put us in touch with the orchestra of Sesto al Reghena (Vénétie).

Laurent DACQUIN publishes his historical booklet: The Life of the Musical Union from 1900 to 2000.

December 2002 : for the first time, the musicians of the Banda play for the Christmas Market of La Motte-Servolex, dressed up as Santa Claus.

Spring 2002 : Andrée PERRIER and Claudie FREMEAUX publish the first " Musical Note", intended for honorary members. They are thus kept informed of the life of the society, and are informed in priority of the various activities of the Musical Union (on the page "Médias").

Ascension 2003 : we welcome the musicians from Sesto al Reghena (Italy).

September 2003 : after six months as substitute director of the orchestra, Laurent CELISSE officially becomes the new director of the Musical Union. He replaces Yves QUEMENER, who was forced to resign for health reasons. We were able to fittingly celebrate his 15 years of directing. The transfer of the baton took place on 9/26/03.

Spring 2004 : The "Union Musicale" participated in the official 30-year celebration of the twinning of the city, at Mundelsheim (Germany).

Spring 2005 : Celebration of 30 years of twinning at La Motte with the two orchestras – Union Musicale and Musikappelle – playing together for the first time at the War Monument.

March 2005 : concert of the Union Musicale at the Espace Malraux (concert hall of Chambéry), at the invitation of Chambéry's symphonic band. The Musical Union changes its logo in order to bring it up-to-date. It is decided to keep the traditional emblem from the previous one: the lyre.

Since 2004, at the suggestion of the director, the Union Musicale participates in the June 21st Music Festival, with the repertoire of their kiosk orchestra.

Another return that is much-appreciated: the clarion buglers who, first for the occasion of the celebration of Saint Cecile at the church (2004), then later during the concert at the Hall Didier Parpillon, were able to be fully-integrated into the orchestra for a number (2006).

November 2005 : we celebrated the Saint Cecile on a Saturday evening during the mass, to conclude the visit which Bishop Monseigneur Ulrich made during the week. The traditional banquet, which was always after the Sunday mass, is also moved. All of the musicians are very satisfied, and it is decided to make this formula an annual practice: mass and banquet on Saturday night.

June 2006 : the website for the Union Musicale is put into place

Ascension 2006 : Invitation from the Musikappelle (Mundelsheim, Germany) to celebrate their 100th anniversary. We travel to Mundelsheim, alomg with an Austrian orchestra: festivities, friendships and a spectacular concert, which for its finale featured a common interpretation by the three orchestras (120 musicians). The event will remain etched on the memories of its participants for a very long time !

2007 : a major event for the orchestra : arrival of the well-known composer Jacob de HAAN, who for this occasion wrote a piece for the Musical Union entitled « Legend of a mountain… the Cat’s Tooth ».The musicians were able to discover the composer’s intentions when he originally wrote the piece, while also under his direction. An emotionally charged event!

Other important moments : The director, Laurent Célisse, suggests the idea of a Beginners’ Band for adults (O.A.). The idea is to propose to those who had never studied music, or who hadn’t played an instrument for many years, to learn directly through group instruction. The band was created in September : the success was immediate.

2009 : national trip : the band is invited to Audruicq, in the north of France.

April 10, 2010 : during the Spring concert, several groups from the Musical Union perform along with the Concert Band, of which, for the first time, our Beginners’ Band, composed of adults who (re)discover a wind instrument by playing together in a band.

2010 : OUR 110 YEARS : to celebrate this event with dignity, a big concert is organized in the Spring, with our friends from the Mundelsheim « Musikkapelle » (Germany), as well as those from the « Filarmonica » in Sesto al Reghena (Italy). 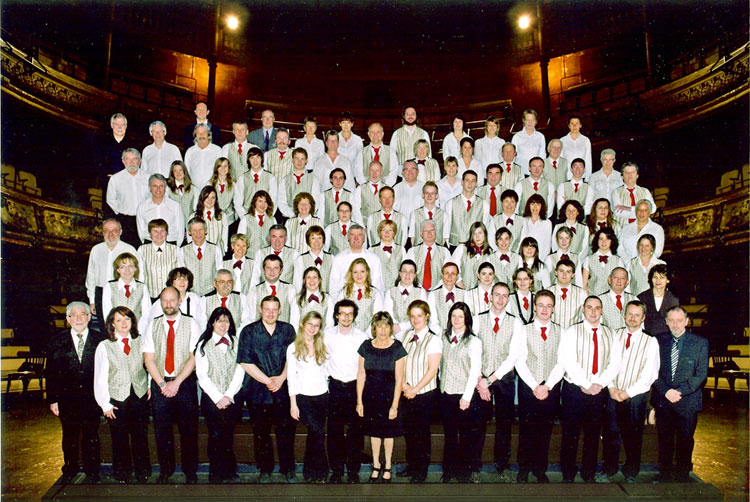